There have been two dominant schools of thought regarding how best to rehabilitate low back pain. The older of the two was based on the work of Williams in the 1930’s. He believed that man’s erect posture puts strain on the lumbar discs by promoting a posture of extension (increasing) of the curve in the back and neck. The deepening of this lumbar curve in upright man was thought  to be responsible for disc strain, and that the mechanical stresses into the disc led to postural failure and pain. 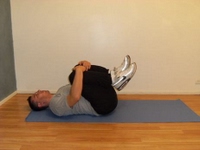 His whole treatment procedure was therefore rigidly based on improving flexion (decreasing) of the curve in the back and neck. Typically patients were taught a series of exercises that involved knee-to-chest manoeuvres or flattening of the curve of the low back.

In recent decades, the model of back pain constructed by Williams has been largely discredited, and few therapists use flexion exercises for acute low back pain or for “first aid”. Instead, McKenzie proposed that prolonged sitting postures and bending activities common to modern man were more to blame for back pain and thus advocated extension exercises (the opposite of Williams!). Consequently, McKenzie exercises largely involve arching of the back or deepening of the curve, which is thought to minimise stress on the lumbar discs. Unlike Williams, however, the McKenzie protocol encompasses a full range of motion, so some flexion is used where therapeutically necessary. Its clinical methodology, while based on extension principles, actually encourages motion in all directions.

It should be noted that the central premise of both of these models is that the intervertebral disc is largely responsible for generating back pain, with other structures playing a secondary role. Research does tend to suggest that disc lesions are responsible for about 39% of low back pain scenarios, and there are tests that can accurately and reliably indicate them as a cause (McKenzie to date has one of the most reliable screening procedures available). But what about the other 61%? 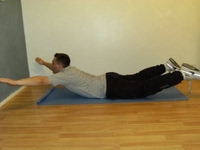 The other most common generators of low back pain are the facet joints at about 15%, sacroiliac joints at about 13%, and the rest due to trigger points (chronic localised areas of muscle spasm), fascial, ligamentous adhesions and other soft tissue lesions. So while the McKenzie method may be useful in decompression of discs, it may not be so successful in dealing with other painful tissues. In fact, clinical trials seem to reflect this scenario. Also, most Chiropractors, Physiotherapists and Osteopaths would tend to agree that several tissues often generate pain in the same patient at any one time, which implies that a multi-modal approach is likely to be most successful, particularly in chronic cases, where Williams flexion exercises may continue to be of benefit.

At Synergy, we use varying combinations of flexion as well as extension exercises, depending upon the individual needs of each patient. Some patients, particularly those in acute pain, will be directed to focus on extension exercises, as they have been shown in trials to be more successful in settling acute disc bulges and inflammation, while other patients (particularly chronic ones) have had their programs modified to improve flexion and core strength.